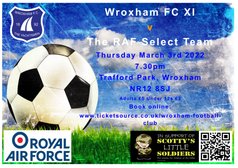 RAF fly in to face the yachtsmen

The RAF representative football team have been lined up to face Jordan Southgate’s high flying Wroxham team in a warm up for their inter services challenge matches against the Army and Navy. The RAF select team is made up of the best players across the whole of the service. The match will take place 3rd of March at Trafford Park, Wroxham with a 7.30 kick off and will be a real test for both sides as well as a chance to raise money for Scotty’s Little Soldiers - a charity dedicated to supporting children and young people (0 to 25 years) who have experienced the death of a parent who served in the British Armed Forces. Army widow Nikki Scott, set up the charity in 2010 after her husband, Corporal Lee Scott, was killed in action in Afghanistan in 2009, leaving behind two young children - Kai was 5 and Brooke was just 7 months.
Lined up to feature for Wroxham at the prestigious game are former Premier league stars Grant Holt, Simon Lappin and a very rare outing for Southgate’s assistant and Norwich City Hall of Famer Adam Drury.
The Yachtsmen’s Goalkeepers’ coach and former RAF man Darren Plowman Read is a huge supporter of Scotty’s little soldiers and will manage the team on the evening. Club chairman Lee Robson jumped at the opportunity to host the game and to support the charity, he said “Not only will this be a brilliant football game, a great night out but it's also a great opportunity to raise some serious money for Scotty’s. It would be great to see servicemen and women from all over Norfolk and Suffolk coming along to support the game and to cheer the lads on depending on which of the services you’re in! We also encourage people in the services and other football supporters to donate to the charity if they can't get to the game and we have set up that capability on the website so please give as much as you can and we hope to see you on the 3rd". We would also like local businesses to sponsor the event to cover costs and get even more money to the charity. Talk to us about how you can help.

You can book your tickets and/or donate online by visiting www.ticketsource.co.uk/wroxham-football-club

you can watch the Scotty's video here. https://www.youtube.com/watch?v=leWa-kzDbVw